The affairs of the Canadian Bahá’í community are administered by elected institutions at the local, regional, and national levels. These institutions attend to the social and spiritual well-being of the community of Bahá’ís, as well as their surrounding society.

Because the Bahá’í Faith does not have clergy, authority is vested in these elected institutions, rather than with the individuals who serve as their members. Elections for Local Spiritual Assemblies, Regional Bahá’í Councils, and National Spiritual Assemblies take place annually, and they are conducted by secret ballot in a spirit of prayer and reflection, without any form of electioneering or nomination. Registered Bahá’ís over 21 years of age may vote and be voted for.

When voting, each elector is urged to consider the individuals who best combine the qualities of loyalty, devotion, experience, a well-trained mind, and other qualities of moral character, wisdom, and experience, and whom each voter decides is well suited to the demanding service of helping to guide and administer the community. The overall diversity of the body — in age, gender, and race — are additional considerations.

Every 19 days, Bahá’ís gather in their communities for an event called the “Nineteen Day Feast” or, simply, the Feast. Everyone in the community — adults, youth, and children — is encouraged to attend these events. Each Feast includes three main elements: spiritual devotions, during which prayers and sacred writings are read; community consultation, during which deliberation takes place on the affairs of the community and reports from the Local Spiritual Assembly are shared and discussed; and social fellowship, during which those present enjoy each other’s company and strengthen bonds of friendship.

Although the Bahá’í Faith has been present in Canada since 1898, the first Local Spiritual Assembly formed in Montreal in 1922. The National Spiritual Assembly of Canada and the United States, a joint body, was first elected in 1925. In 1948, Canada formed its own National Assembly, and the following year it was legally incorporated by an Act of Parliament. By 1973, a Spiritual Assembly had been established in every provincial and territorial capital city of Canada. There are now Local Assemblies in more than 200 localities across the country.

The election of Regional Bahá’í Councils, with a mandate and jurisdiction lying between the Local Assemblies and the National Assembly, is a recent development in the worldwide Bahá’í community. Canada was one of the earliest countries to see the emergence of Bahá’í Regional Councils, in 2002.

The Universal House of Justice is the international governing body of the Bahá’í world community, and its nine members are elected every five years by the entire membership of National Assemblies from around the world. The Universal House of Justice appoints individuals as Counsellors, who function under its guidance and exert influence on the life of the Bahá’í community. Counsellors, and their appointed Auxiliaries, encourage action, foster individual initiative, and promote learning within the Bahá’í community as a whole, in addition to offering advice to Spiritual Assemblies.

An important dimension of administration is the development of material resources to advance community life. Supporting the funds of the community is considered to be a privilege for Bahá’ís. All contributions to these funds are strictly voluntary and confidential and are accepted only from registered members. The use of coercion or manipulation to solicit funds is not permitted. 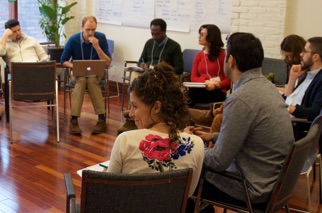 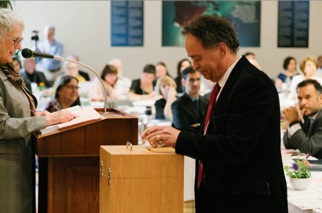 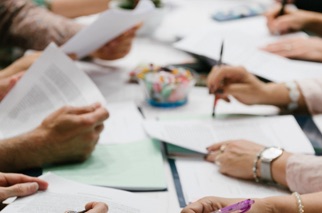 The National Spiritual Assembly of the Bahá’ís of Canada

Learn more about this topic

More information about this topic and others is available on Bahai.org, the official website of the worldwide Bahá’í community: