Abdu’l-Bahá was the eldest son of Bahá’u’lláh and appointed Head of the Bahá’í Faith after His Father’s passing in 1892. From a young age, He shared a life of exile and imprisonment with His Father, imposed by both the Persian government and Ottoman Empire.

In 1908, as a result of the Young Turk Revolution, ‘Abdu’l-Bahá, Who was then living in the penal colony of Akká, was freed. Several years later, at the age of 64, with little command of the English language and no formal education, he embarked on an extraordinary and arduous journey lasting three years through Egypt, Europe and North America – including Canada – to proclaim and elucidate His Father’s teachings.

‘Abdu’l-Bahá’s primary destination in Canada was Montreal, home to the country’s largest Bahá’í community at the time, and he also stopped briefly at Union Station in Toronto. May Maxwell, a prominent early Bahá’í, invited Him. ‘Abdu’l-Bahá stayed for nine days, arriving on the evening of August 30, 1912 and departing on the morning of September 9. He was first a guest of the Maxwell’s at their home on the foot of Mount Royal and later moved to the Windsor Hotel to accommodate more visitors.

Talks given by ‘Abdu’l-Bahá

During His time in Montreal, ‘Abdu’l-Bahá spoke to thousands of people in a variety of settings, usually through a translator. On a number of evenings, the Maxwell’s home on Pine Avenue West was filled to capacity. He also accepted invitations to speak to audiences at the Unitarian Church of the Messiah and St. James Methodist Cathedral Church – at the time the largest Methodist Church in Canada – as well as to a group of 500 socialists at Coronation Hall. He also had personal interviews with leading members of society, including the Archbishop of Montreal and the principal of McGill University.

To these audiences, ‘Abdu’l-Bahá articulated the main principles of His Father’s Faith: that the religions of God have the same foundation, but that religion was in need of renewal; that prejudices, whether religious, racial, patriotic or political must be eradicated; that women and men are equal in the sight of God; that faith must be in accord with science and reason, and that it is every individual’s duty to thoroughly investigate reality. ‘Abdu’l-Bahá also spoke on economic justice and the means for reducing extreme material inequality. 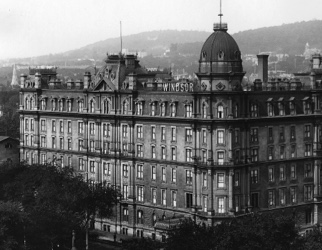 “…this is Abdul Baha, leader of the Bahai peace movement, who has come to preach his gospel of universal brotherhood and love to the people of Canada.”

Read transcriptions of talks delivered by ‘Abdu’l‑Bahá while in Montreal on the Bahá’í Reference Library.

Talks at the Maxwell home

Public talks at other locations

Media coverage of His visit

The Montreal press granted His visit extensive coverage. Thirty-four articles were published in ten of the twelve daily newspapers – more than any other city in North America. Perhaps to some journalists’ surprise given His traditional Eastern dress, ‘Abdu’l-Bahá’s keen insight into contemporary issues captured headlines. He counselled that the material achievements of the West should be coupled with spiritual advancements for true civilization to be attained – otherwise it would lead to destruction.

One manifestation of this was the global arms race that, in 1912, was reaching its height in Europe. ‘Abdu’l-Bahá urgently warned of an impending war, most appalling in the world’s history. The first of the World Wars erupted a few years later. In one press interview, ‘Abdu’l-Bahá praised Canadians for not building up armaments, and in this context referred to the country as a “happy land.”

The legacy of His visit

Some years after his visit, ‘Abdu’l-Bahá penned a series of letters addressed to the North American Bahá’í community, including several to Canada. He wrote of the “utmost joy” associated with His time in Montreal.

The Maxwell house, which ‘Abdu’l-Bahá referred to as His home, has been designated a Bahá’í Shrine – the only one of its kind in Canada – and is preserved to its original state circa 1912. Visitors are welcome.

A glimpse of ‘Abdu’l-Bahá’s visit to Montreal

Learn more about ‘Abdu’l-Bahá’s visit to Montreal in the context of historical developments at that time. The 239 Days Project tells the story of each day of His visit to North America, including His time in Canada.